December 2015 marks the sesquicentennial anniversary of the first publication of Lewis Carroll's nonsensical
children's story Alice's Adventures in Wonderland! The first UK edition (Macmillan, 1865) was
suppressed when neither Carroll nor his illustrator John Tenniel were satisfied with the
quality of its illustrations, with only a handful of copies surviving. The remaining
sheets were sold to D. Appleton in New York, who published Alice with a
new 1866 title page. Due to its overwhelming popularity with
both children and adults, Alice has been adapted
countless times into films, musicals, and toys,
and numerous artists have created their own
illustrations to accompany the original
text. Alice enthusiasts celebrate its
many milestones, including its
publication anniversaries and
Lewis Carroll's birthday,
among other events.

The result is a body of Alice literature and ephemera that continues to grow
curiouser and curiouser... 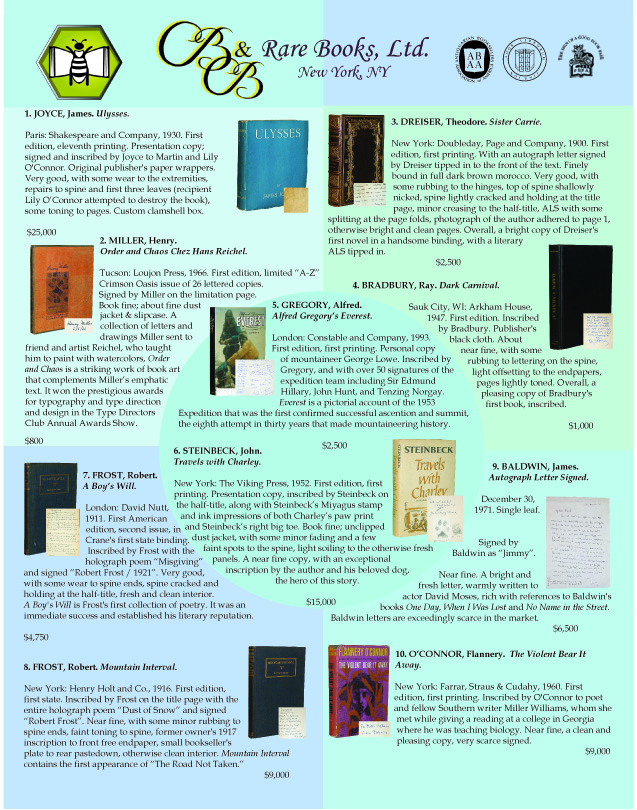 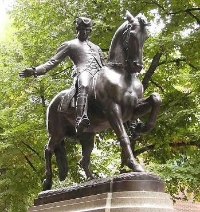 Come say hello at BOOTH 309 ~ Let us know if you would like a complimentary pass! 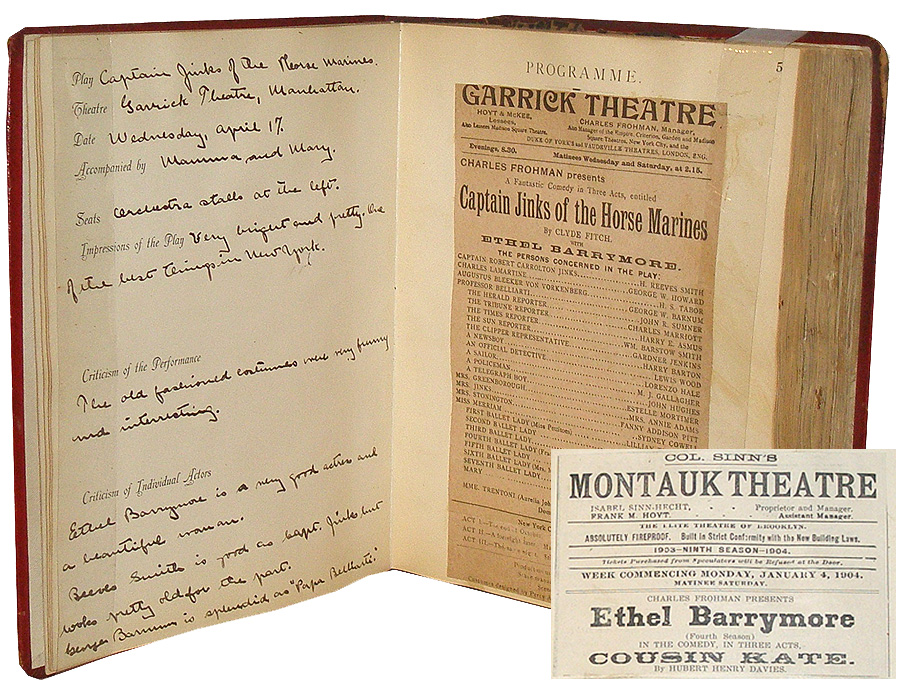 Four volumes of theater programs bound in to scrapbooks, 1895-1906.

Bindings in poor to fair condition: some bindings split, some leaves detached but still present. Contents fair to good condition: pages generally toned and chipped but including some programs that are complete, unfaded, and loosely inserted inside.

and reviews, collected and with annotations by Phebe Andrews Luther of Brooklyn, NY. Productions were staged on Broadway and in Brooklyn theatres. 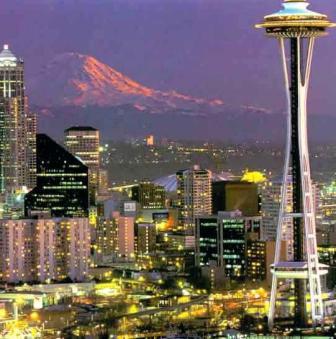 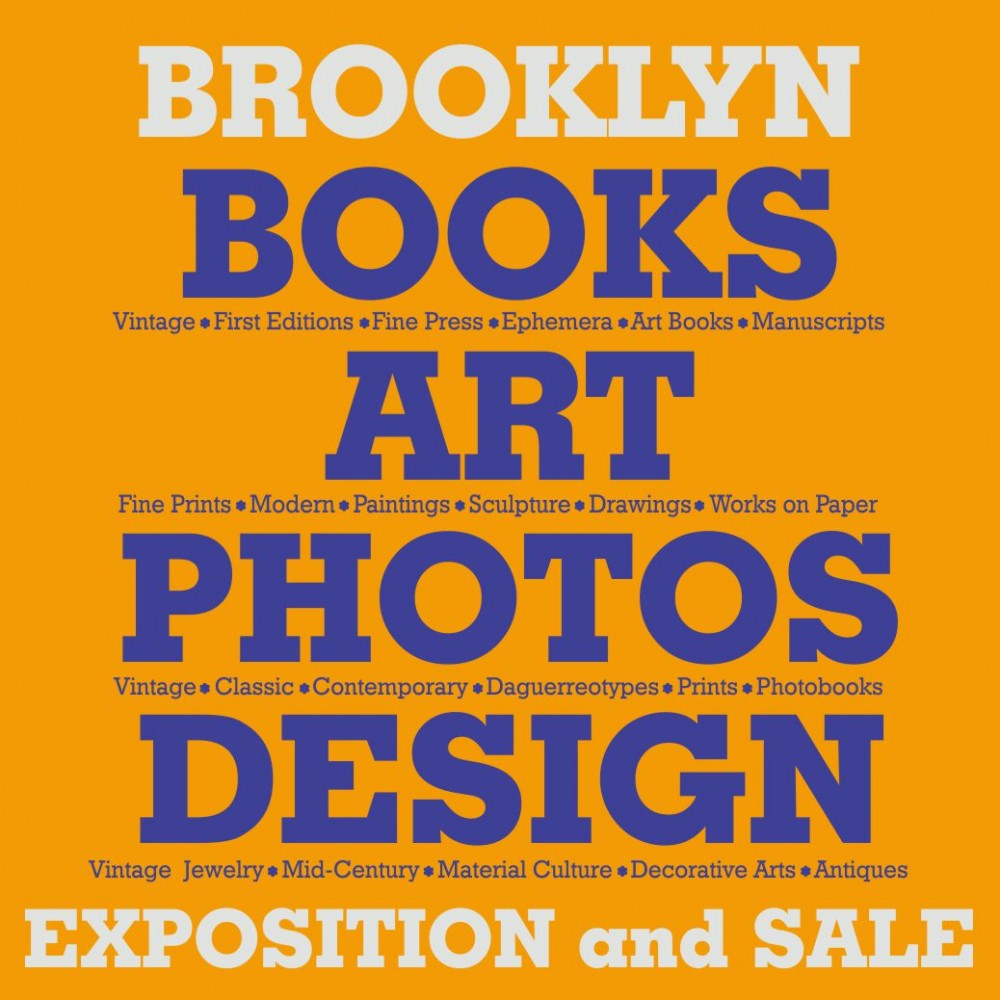 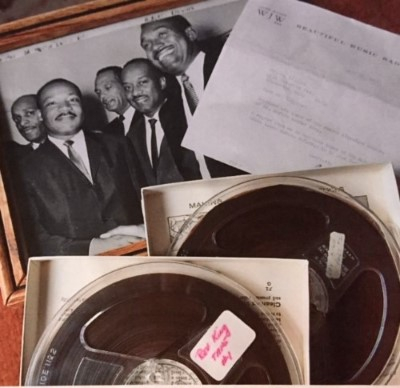 King, Jr., Dr. Martin Luther. Reel-to-Reel Master Tapes of an Address given at the Nobel Peace Prize Dinner in Cleveland, Ohio on March 23, 1965.

Two 7" reel audio tapes. Excellent quality, with just a few minutes of light static, else fine quality. Total length of speech is one hour, one minute, and forty-two seconds.

Martin Luther King, Jr. was awarded the Nobel Peace Prize in 1964. The following year, he traveled the US to speak about his acceptance of the award, and to mobilize support for the 1965 Voting Rights Act. On March 23rd, 1965 at the Sheraton Cleveland Hotel, the Cleveland Civic Committee sponsored an honorary dinner for Dr. King, and he delivered this hour long speech. This day was right in the middle of the third and final Selma march; Dr. King began the march on March 21st, then flew to Cleveland, OH to give this speech, and then returned to Montgomery, AL to meet the marchers as they entered the capital. While this Nobel Prize Dinner was picketed by white segregationists, King’s presentation was well attended by the African American community and he raised funds to defray the SCLC’S cost for the Selma protests.

Original Martin Luther King, Jr., speech recordings are of the utmost rarity. There have been a few discoveries of audio recordings of King's speeches recently (UCLA April 27, 1965, 55 minutes; New York City, September 12, 1963, 26 minutes; December 21, 1960, 10 minutes), but only the December 21, 1960 recording was previously sold in 2012 and none have been offered publicly or at auction. 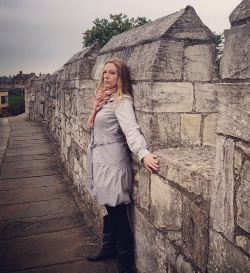 Sponsored by the PBFA

Milton Glaser (1929- ) is a renowned American graphic designer whose iconic designs have shaped popular culture from the 1960s through the present day. Born, raised, and  educated in New York City, Glaser made his mark with his poster for Bob Dylan's Greatest Hits featuring the folk singer's psychedelic silhouette, DC Comics' "Bullet Logo," and the now ubiquitous "I ❤ NY" logo. In addition to his design work, Glaser has influenced the literary world through his Push-Pin Studios (founded in 1954 with fellow Cooper Union graduates Edward Sorel, Seymour Chwast, and Reynold Ruffins) and New York magazine (founded in 1968 with Clay Felker).

While his ability to capture the zeitgeist of the '60s and '70s would have ensured his legacy, it is the boldness of Glaser's innovation combined with the simplicity of his aesthetic that allow his designs to endure and naturally lend themselves to mass production. Indeed, in an interview with Brad Holland for Step-By-Step magazine, Glaser remarked that "the most significant value of any work or design is in its effect on the world. Mass reproduction is one way for these words to be seen and experienced." Accordingly, just as his work lent itself to posters and advertisements, so did Glaser's art play an important role in the heydey of dust jacket illustrations of the second half of the 20th century. Like his posters, Glaser's dust jackets range from the vivid and surreal to the  strikingly simple, all the while maintaining the polished look that continues to make Glaser's artwork iconic today. http://www.miltonglaser.com/

Join us in Baltimore the weekend before Labor Day -