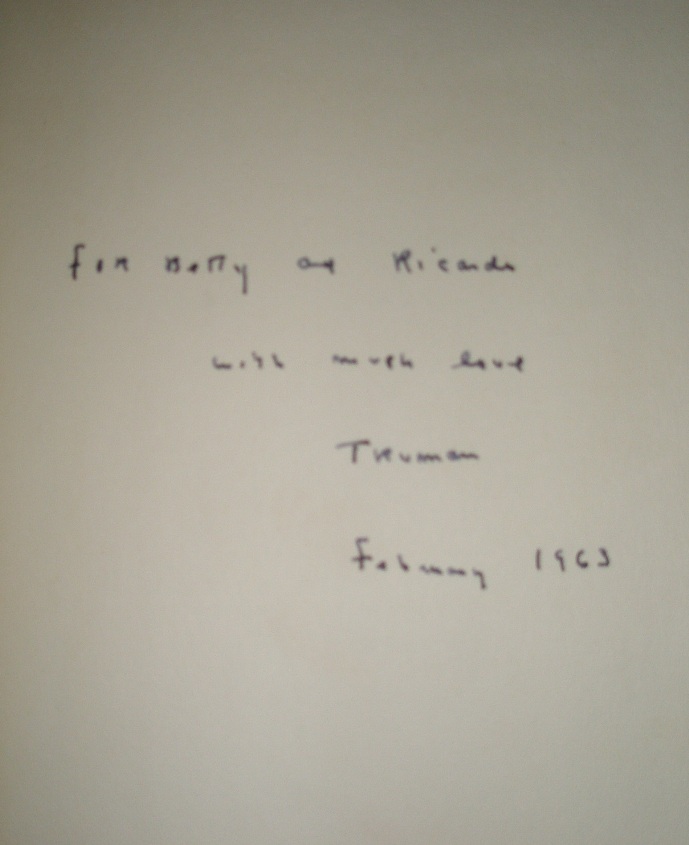 First edition, first printing. Presentation copy. Signed and inscribed by Capote to front endpaper. Very good or better book in a very good unclipped jacket with some wear, chips and a few tears.

This season, New York City’s 92nd Street Y will be presenting stage adaptations of literary works. The Theatre for a New Audience and the New York Theatre Workshop are co-sponsoring the production of The Grand Inquisitor section of Dostoevsky’s The Brother’s Karamazov on November 10th. A discussion of the themes will follow the 55 minute adaptation. Completed in November of 1880, The Brothers Karamazov was Dostoevsky’s final novel and the culmination of his life’s work. Its themes of moral struggles in modern Russia have heavily influenced Freud, Kafka, Joyce, and Vonnegut.

On November 17th, the American premiere of Virginia Woolf’s The Waves will be presented. Sponsored by Lincoln Center, this production originally debuted in 2006 at the National Theatre in London. The Waves was an experimental work for Woolf, blurring the lines between poetry and prose, written through soliloquies of its six characters.

The Y’s Unterberg Poetry Center provides literature classes, creative writing workshops, and a reading series, featuring both new and classic authors. The 92nd Street Y is widely considered to be “one of the premier book talk venues in the city.”

B & B Rare Books is proud to present Middlemarch, George Eliot’s masterpiece, in its original parts. 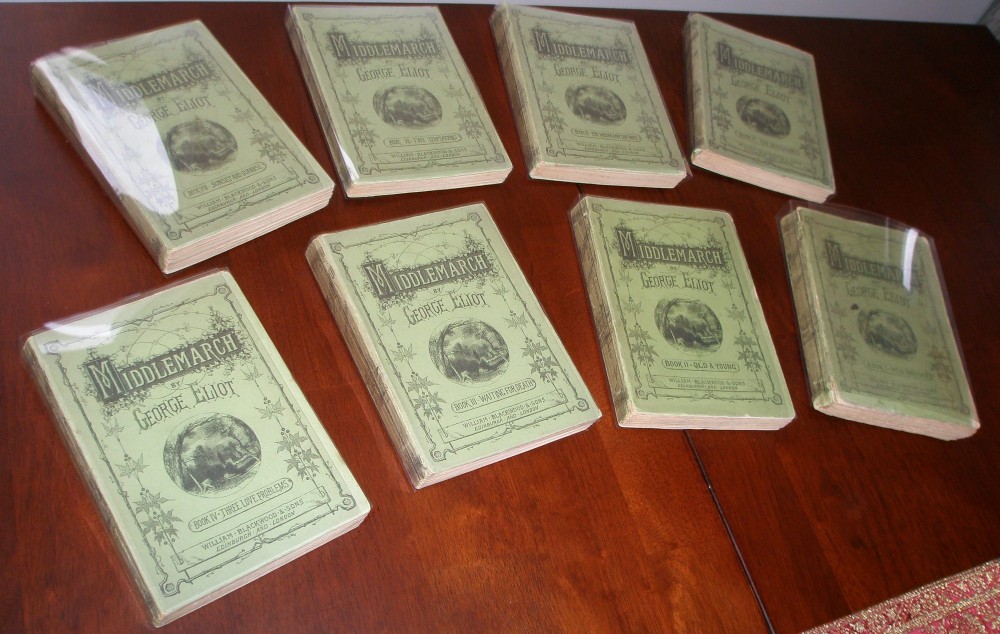 B & B Rare Books is proud to present Middlemarch, George Eliot’s masterpiece, in its original parts. Set in the early 1830’s in the fictitious town of Middlemarch, the breadth of the story led the publishers to issue the first edition in serial form. Eight parts were issued two months apart during 1871-1872. The novel was then issued in a one-volume edition in 1874, and this is the format that is most commonly seen today.

Middlemarch has been offered in original parts only once in the last 10 years by auction. This scarcity makes it highly collectible, as does its importance to the realm of English literature. It has been praised as one of the most important and popular works of English fiction. Virginia Woolf called Middlemarch “the magnificent book that, with all its imperfections, is one of the few English novels written for grown-up people.”

Books Win Big at the Oscars

At 2008’s Academy Awards, Cormac McCarthy took home the Best Picture award for No Country For Old Men. Well, maybe not. In actuality, the film’s producers, Scott Rudin and Joel & Ethan Coen, were the ones to accept the Oscar, but this adapted film was based upon McCarthy’s novel of the same title.

Adapted films were very popular this year, with three out of five Best Picture nominations being adapted from books. Atonement was based on Ian McEwan’s award-winning work, and Upton Sinclair’s novel, Oil!, was the inspiration for There Will Be Blood. While novels are most often used for film adaptations, plays are also frequently used. The success of movies such as West Side Story and Kiss Me, Kate give merit to the adage that William Shakespeare is the most popular screenwriter in Hollywood.

Adaptations to the screen may be faithful to the original work’s time period, or older works can be updated to modern times. Through a filmmaker’s lens, the vision of the original author is often blended with the vision of the film production team. Sometimes an adapted film can leave us with a deeper appreciation for the novel, but other times we feel betrayed by the film version if it does not seem true to the book. Either way, with the success of film adaptations of recent novels such as The Kite Runner, or classic books like To Kill A Mockingbird, literature on the big screen is sure to be popular for years to come.

Coming soon to a theatre near you: